The first wave had given birth, a hundred years ago, in March, 1919, to the Communist International; the second will realize the objective of this one: the world unification and the realization of socialism on all the planet.

The formation of a World Socialist Republic is unavoidable in the 21st century. The realization of the complete unification of Humanity, on the basis of socialist relations in the economy and throughout society, is certain. There can be absolutely no doubt about it.

We affirm that the mastery of dialectical materialism and its fundamental theses on the universe are the very basis for understanding reality and transforming it.

It is undeniable that this still requires formidable initiatives. Mao Zedong had spoken in the 1960s of the next fifty to one hundred years, when humanity would experience upheavals like never before. We are precisely in this period and it is about being on the front line. We are as the vanguard of the working class in Belgium and France.

We say: there will be no capitulation, no turning back, no modification of the ideological fundamentals, nor revision of the main principles. We are fully aware of the complexity of the tasks incumbent upon us, but we will be able to assume them, with vigor and the greatest sense of responsibility. We are full of optimism about the future: the triumph of Communism corresponds to the movement of the universe itself. The proletariat is the most revolutionary class in history.

It is true that in the imperialist metropolis, the recomposition of the proletarian fabric is still an ongoing process, which does not follow a linear path and still requires an extremely important substantive work. There is still a titanic job to do in this area. We believe, however, that we have grasped the necessary general guidelines. In this sense, our two organizations are fully engaged in this struggle to ensure that the proletariat recovers itself and goes back to the reconquest of its identity, which has undergone profound changes due to the increase of the productive forces, beyond deep deformations, significant errors.

This process of recomposition of the proletarian fabric corresponds to the emergence of the second wave of the World Revolution. And the capitalist mode of production, both in Belgium and in France, experiences such internal problems, because of its historical limits, that it is less and less able to freeze social relations by means of the apparatus of State and corruption of a large part of the proletariat. This had led, since the 1950s, to the displacement of the main contradiction in the zone of storms: Africa, Latin America, Asia. We are now in a new period.

There is also the reaffirmation of the communist ideology that arises historically, through the maturation of class conflicts and especially the driving role of diffusion played by our organizations. Here we affirm very clearly that the explanations we provide of dialectical materialism are the decisive weapons to have the necessary tools, in the theoretical and practical, intellectual and material fields, to make advance the Cause. It is not a question of a side aspect or a philosophy accompanied by simple demands, but of the hard core of the communist affirmation.

It goes without saying, however, that it would be wrong to consider unilaterally that the proletarian-bourgeois contradiction has already resumed its natural course. It is very far from being the case. The ideological, cultural, social and political remains of the 1950-1980s are still widely present. The years 1990-2010 were also marked by a strengthening of many aspects of the capitalist mode of production, due to technological progress, the collapse of the bloc dominated by Soviet social-imperialism and integration into the capitalist world economy of China which became social-fascist.

In this sense, it is incorrect to consider a movement like the « yellow vests » in France other than as an expression of the capitalist crisis in general and the petty bourgeoisie in particular. There is a scissors phenomenon where everything between the proletariat and the bourgeoisie is crushed. This phenomenon is also parallel to many others who, similarly, express the fear of seeing capitalism not being longer able to ensure social peace, to give free rein to small capitalists, to neutralize the working class.

Petty-bourgeois interpretations of the massive ecological crisis and the terrifying ecocide it causes, the catastrophic aggravation of global warming, the dramatic animal condition, are also the terrorized expression of the middle layers of capitalism taken between the hammer of proletarian demands and the anvil of capitalism. They are actually phenomena corresponding to the historical limit of capitalism. The time of its world overtaking has arrived.

Discourses on a « finite world », on the need to move to « sustainable » economic development, to adopt a more « sober » way of life, are nothing more than an attempt to curb the wheel of History. Fascism also reappears more strongly as a requirement for a step back in time. Calls to be more « reasonable » are always more numerous within the parasitic intellectual layers. All this catastrophism is fundamentally foreign to who has understood the magnitude of the changes underway, their scale.

In reality, matter is inexhaustible and we know a time of general transformation, both of social life and of humanity’s relationship with the rest of matter. In order to live up to this process, we must liberate the productive forces by adopting the principles of socialism in all fields. This is what will establish productive dynamics for the whole of life in the Biosphere that is the planet, announcing in the medium term the process of spatial colonization and the ever greater diffusion of life.

This requires a great capacity for self-criticism, in relationship to the old way of life. Only collectivism is able to break the individualism and selfishness that characterize the initiatives and dominant values in the capitalist mode of production. Only a perspective based on the notion of totality, of the whole, of universalism, can allow society not to fall under the blows of ultra-individualism, of its capricious consumption, of its contempt for all morality and all social requirement.

The capitalist mode of production, in perdition, also produces only cultural horrors and ideological poisons. Contemporary art, moral relativism, the most outrageous cynicism, the cult of excessive egos and futile appearance, subjectivist literature, dissonant music as a value in itself or repetitive and simplistic music with simple harmonies… Capitalism takes advantage of the overproduction of capital to overrun ever more aspects of everyday life.

This is vain, however. The masses feel fundamentally alien to all this decadence, even if some sectors being more or less important may be fascinated or momentarily disoriented. The masses are on the side of transformation and culture, openness and development. Fixations on identity, material fetishism, superficiality, are essentially foreign to them. Here, the future opposes itself to the celebration of an idealized past, Socialism to the decadence of « culture » in capitalism, to that anticapitalist romanticism that is fascism.

In Belgium and France, the battle is therefore the one to free the initiatives of the masses, to raise their consciousness and their organizational capacities. The avant-garde opens here spaces and, starting from workers’ centrality, forms the movement bringing the emergence of the People’s Democracy as a strategic proposition. It is a question of making falter the dominant system, of shaking it, go to its assault for the establishment of a new State. We must be certain of victory here.

Long live the working class, the most revolutionary class in history!

People’s war up to Communism!

Long live the second wave of the world revolution! 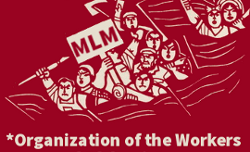