How did Deng Xiaoping launch the struggle against dialectical materialism? He had to appear as reorganizing the ideology, to bring it on its correct path.

Therefore, Deng Xiaoping pretended to act in the name of the “truth”.

Bourgeois struggle against the “two whatevers”

On September 19, 1977, the information was given that Deng explained that “seeking truth from facts” was “the quintessence of the philosophical thinking of Mao Zedong”, when talking with the leading member of the Ministry of Education.

Six months later, on May 11, 1978, Guangming Ribao (Guangming Daily) carried an article entitled “Practice is the Sole Criterion for Testing Truth”, which was a pragmatic line’s attack against the “two whatevers”, representing the fidelity to dialectical materialism.

Here is how Deng Xiaoping explains the “two whatevers”:

If this principle were correct, there could be no justification for my rehabilitation, nor could there be any for the statement that the activities of the masses at Tiananmen Square in 1976 were reasonable [Allusion to the anti-Communist demonstration on 5 April, in consequence of which Deng Xiaoping was considered as “counter-revolutionary” by Mao Zedong and the Political Bureau of the Central Committee].

He said that if one’s work was rated as consisting 70 per cent of achievements and 30 per cent of mistakes, that would be quite all right, and that he himself would be very happy and satisfied if future generations could give him this “70-30” rating after his death.” (The “Two Whatevers” Do Not Accord With Marxism, May 24, 1977)

This was not all. Deng Xiaoping had to call for a reinterpretation of Mao’s teachings, always in the spirit of the rejection of the indivisibility of matter. Deng Xiaoping could reduce what appeared as Maoism in a sort of “Mao Zedong’s thought” which was just a “method”.

“Mao Zedong Thought has developed Marxism-Leninism in many spheres, not just in some individual aspects. It constitutes an integral system and is a further development of Marxism.

For this reason I suggest that in addition to editing and publishing the works of Mao Zedong, comrades doing theoretical work should endeavour to expound Mao Zedong Thought as a system from various perspectives.” (Mao Zedong Thought Must Be Correctly Understood As An Integral Whole, July 21, 1977)

The bourgeois movement of 1989

This brings us directly to the movement of 1989.

What happened is the following: on the 15th of April, Hu Yaobang died. 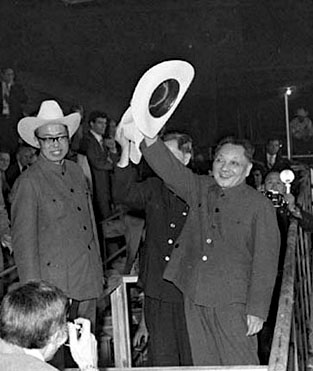 After having being one of the responsible of the Party targeted by the GRCP, he became the leader of the economical reforms in China during the 1980’s; he was Deng Xiaoping’s man, the number 2 of the social-fascist regime.

Nevertheless, Hu Yaobang considered that the movement of liberalization had to move faster. For this reason, he refused to criticize the protest movement launched in December 1986.

This protest was based in the University of Science and Technology in Hefei, with the astrophysicist Fang Lizhi as main figure.

Fang Lizhi had to work in a coal mine during the GRCP; he was very active in the promotion of the bourgeois conception of the world: he was the main promoter of the “Big bang” conception, against the principle of the indivisibility of matter.

The people responsible for the movement of 1986 were expelled from the “Communist” Party, and Hu Yaobang himself was put aside for being on the same line as them.

As he died, in 1989, the bourgeois liberal movement began another offensive. 50 000 students marched 22 April 1989 to Tiananmen Square to participate in Hu’s memorial service and call for liberalism.

This was the beginning of the Tiananmen Square protests of 1989. Fang Lizhi chose then to seek asylum in the US embassy, and then moved to the USA.

The 1989 movement was the product of the inevitable contradiction between revisionism and use of liberalism in the field of cosmology.