Lenin : Leo Tolstoy as the Mirror of the Russian Revolution − 1908

To identify the great artist with the revolution which he has obviously failed to understand, and from which he obviously stands aloof, may at first sight seem strange and artificial. A mirror which does not reflect things correctly could hardly be called a mirror.

Our revolution, however, is an extremely complicated thing. 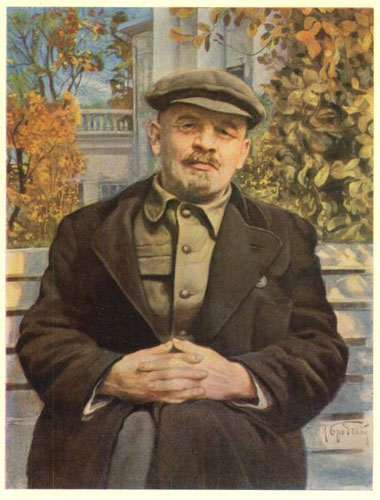 Among the mass of those who are directly making and participating in it there are many social elements which have also obviously not understood what is taking place and which also stand aloof from the real historical tasks with which the course of events has confronted them.

And if we have before us a really great artist, he must have reflected in his work at least some of the essential aspects of the revolution.

The legal Russian press, though its pages teem with articles, letters and comments on Tolstoy’s eightieth birthday, is least of all interested in analysing his works from the standpoint of the character of the Russian revolution and its motive forces.

The whole of this press is steeped to nausea in hypocrisy, hypocrisy of a double kind: official and liberal.

The former is the crude hypocrisy of the venal hack who was ordered yesterday to hound Leo Tolstoy, and today to show that Tolstoy is a patriot, and to try to observe the decencies before the eyes of Europe. That the hacks of this kind have been paid for their screeds is common knowledge and they cannot deceive anybody.

Much more refined and, therefore, much more pernicious and dangerous is liberal hypocrisy. To listen to the Cadet Balalaikins of Rech, one would think that their sympathy for Tolstoy is of the most complete and ardent kind.

[Balalaikin—a character in Saltykov-Shchedrin’s A Modern Idyll; a liberal windbag, adventurer and liar.]

Actually, their calculated declamations and pompous phrases about the “great seeker after God” are false from beginning to end, for no Russian liberal believes in Tolstoy’s God, or sympathises with Tolstoy’s criticism of the existing social order, lie associates himself with a popular name in order to increase his political capital, in order to pose as a leader of the nation-wide opposition; he seeks, with the din and thunder of claptrap, todrown the demand for a straight and clear answer to the question: what are the glaring contradictions of “Tolstoyism” due to, and what shortcomings and weaknesses of our revolution do they express?

The contradictions in Tolstoy’s works, views, doctrines, in his school, are indeed glaring. On the one hand, we have the great artist, the genius who has not only drawn incomparable pictures of Russian life but has made first-class contributions to world literature. On the other hand we have the landlord obsessed with Christ.

On the one hand, the remark ably powerful, forthright and sincere protest against social falsehood and hypocrisy; and on the other, the “Tolstoyan”, i.e., the jaded, hysterical sniveller called the Russian intellectual, who publicly beats his breast and wails: “I am a bad wicked man, but I am practising moral self-perfection; I don’t eat meat any more, I now eat rice cutlets.”

On the one hand, merciless criticism of capitalist exploitation, exposure of government outrages, the farcical courts and the state administration, and unmasking of the profound contradictions between the growth of wealth and achievements of civilisation and the growth of poverty, degradation and misery among the working masses.

On the other, the crackpot preaching of submission, “resist not evil” with violence.

On the one hand, the most sober realism, the tearing away of all and sundry masks; on the other, the preaching of one of the most odious things on earth, namely, religion, the striving to replace officially appointed priests by priests who will serve from moral conviction, i. e., to cultivate the most refined and, therefore, particularly disgusting clericalism. Verily:

Thou art a pauper, yet thou art abundant,
Thou art mighty, yet thou art impotent—
—Mother Russia! [From the poem by N. A. Nekrasov “Who Can Be Happy and Free in Russia”.]

That Tolstoy, owing to these contradictions, could not possibly understand either the working-class movement and its role in the struggle for socialism, or the Russian revolution, goes without saying. But the contradictions in Tolstoy’s views and doctrines are not accidental; they express the contradictory conditions of Russian life in the last third of the nineteenth century.

The patriarchal countryside, only recently emancipated from serfdom, was literally given over to the capitalist and the tax-collector to be fleeced and plundered. The ancient foundations of peasant economy and peasant life, foundations that had really held for centuries, were broken up for scrap with extraordinary rapidity.

And the contradictions in Tolstoy’s views must be appraised not from the standpoint of the present-day working-class movement and present-day socialism (such an appraisal is, of course, needed, but it is not enough), but from the standpoint of protest against advancing capitalism, against the ruining of the masses, who are being dispossessed of their land— a protest which had to arise from the patriarchal Russian countryside.

Tolstoy is absurd as a prophet who has discovered new nostrums for the salvation of mankind—and therefore the foreign and Russian “Tolstoyans” who have sought to convert the weakest side of his doctrine into a dogma, are not worth speaking of.

Tolstoy is great as the spokesman of the ideas and sentiments that emerged among the millions of Russian peasants at the time the bourgeois revolution was approaching in Russia.

Tolstoy is original, because the sum total of his views, taken as a whole, happens to express the specific features of our revolution as a peasant bourgeois revolution.

From this point of view, the contradictions in Tolstoy’s views are indeed a mirror of those contradictory conditions in which the peasantry had to play their historical part in our revolution.

On the one hand, centuries of feudal oppression and decades of accelerated post-Reform pauperisation piled up mountains of hate, resentment, and desperate determination.

The striving to sweep away completely the official church, the landlords and the landlord government, to destroy all the old forms and ways of landownership, to clear the land, to replace the police-class state by a community of free and equal small peasants—this striving is the keynote of every historical step the peasantry has taken in our revolution; and, undoubtedly, the message of Tolstoy’s writings conforms to this peasant striving far more than it does to abstract “Christian Anarchism”, as his “system” of views is sometimes appraised.

On the other hand the peasantry, striving towards new ways of life, had a very crude, patriarchal, semi-religious idea of what kind of life this should be, by what struggle could liberty be won, what leaders it could have in this struggle, what was the attitude of the bourgeoisie and the bourgeois intelligentsia towards the interests of peasant revolution, why the forcible overthrow of tsarist rule was needed in order to abolish landlordism.

The whole past life of the peasantry had taught it to hate the landowner and the official, but it did not, and could not, teach it where to seek an answer to all these questions. In our revolution a minor part of the peasantry really did fight, did organise to some extent for this purpose; and a very small part indeed rose up in arms to exterminate its enemies, to destroy the tsar’s servants and protectors of the landlords. Most of the peasantry wept and prayed, moralised and dreamed, wrote petitions and sent “pleaders”—quite in the vein of Leo Tolstoy.

And, as always happens in such cases, the effect of this Tolstoyan abstention from politics, this Tolstoyan renunciation of politics, this lack of interest in and under standing of politics, was that only a minority followed the lead of the class-conscious revolutionary proletariat, while the majority became the prey of those unprincipled, servile, bourgeois intellectuals who under the name of Cadets hastened from a meeting of Trudoviks to Stolypin’s ante room, and begged, haggled, reconciled and promised to reconcile—until they were kicked out with a military jack- boot.

Tolstoy’s ideas are a mirror of the weakness, the short comings of our peasant revolt, a reflection of the flabbiness of the patriarchal countryside and of the hidebound cowardice of the “enterprising muzhik”.

Take the soldiers’ insurrections in 1905-06. In social composition these men who fought in our revolution were partly peasants and partly proletarians.

The proletarians were in the minority; therefore the movement in the armed forces does not even approximately show the same nation-wide solidarity, the same party consciousness, as were displayed by the proletariat, which became Social-Democratic as if by the wave of a hand. Yet there is nothing more mistaken than the view that the insurrections in the armed forces failed because no officers had led them.

On the contrary, the enormous progress the revolution had made since the time of the Narodnaya Volya was shown precisely by the fact that the “grey herd” rose in arms against their superiors, and it was this self-dependency of theirs that so frightened the liberal landlords and the liberal officers.

[Narodnaya Volya (The People’s Will)—an illegal organisation of the revolutionary-minded Narodnik intellectuals founded in 1879 with the object of fighting the autocracy. It existed up to the second half of the eighties.]

The common soldier fully sympathised with the peasants’ cause; his eyes lit up at the very mention of land.

There was more than one case when authority in the armed forces passed to the mass of the rank and file, but determined use of this authority was hardly made at all; the soldiers wavered; after a couple of days, in some cases a few hours, after killing some hated officer, they released the others who had been arrested, parleyed with the authorities and then faced the firing squad, or bared their backs for the birch, or put on the yoke again— quite in the vein of Leo Tolstoy!

Tolstoy reflected the pent-up hatred, the ripened striving for a better lot, the desire to get rid of the past—and also the immature dreaming, the political inexperience, the revolutionary flabbiness.

Historical and economic conditions explain both the inevitable beginning of the revolutionary struggle of the masses and their unpreparedness for the struggle, their Tolstoyan non-resistance to evil, which was a most serious cause of the defeat of the first revolutionary campaign.

It is said that beaten armies learn well.

Of course, revolutionary classes can be compared with armies only in a very limited sense. The development of capitalism is hourly changing and intensifying the conditions which roused the millions of peasants—united by their hatred for the feudalist landlords and their government—for the revolutionary- democratic struggle.

Among the peasantry themselves the growth of exchange, of the rule of the market and the power of money is steadily ousting old-fashioned patriarchalism and the patriarchal Tolstoyan ideology.

But there is one gain from the first years of the revolution and the first reverses in mass revolutionary struggle about which there can be no doubt. It is the mortal blow struck at the former softness and flabbiness of the masses.

The lines of demarcation have become more distinct.

The cleavage of classes and parties has taken place. Under the hammer blows of the lessons taught by Stolypin, and with undeviating and consistent agitation by the revolutionary Social-Democrats not only the socialist proletariat but also the democratic masses of the peasantry will inevitably advance from their midst more and more steeled. fighters who will be less capable of falling into our historical sin of Tolstoyism! 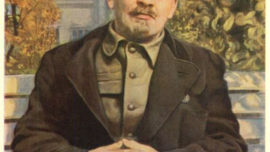